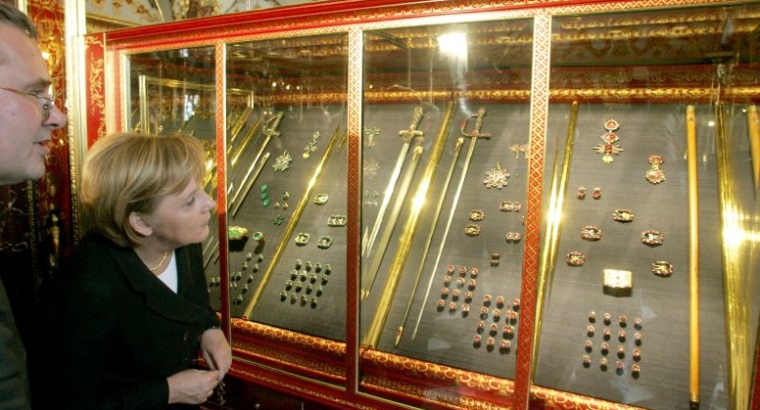 In Germany, caught thieves who robbed the Dresden Treasury for a billion euros

During a police RAID, three participants in last year’s robbery of the jewelry Treasury “Green vaults”, part of the State art collections of Dresden, were detained.

On Tuesday, November 17, in the neukeln district of Berlin, during a large — scale RAID involving 1,638 police officers, 18 objects were searched-apartments, cars and garages-and three German citizens were detained, suspected of robbing the Green vaults Treasury in Dresden in November last year.

The destruction of the Dresden Treasury “Green vaults” (Grünes Gewölbe) on November 25, 2019 is called the largest robbery of modern times. On this day, unknown people first set fire to the transformer box that supplies the Museum with electricity, and then entered the Treasury through the window, smashed the display case with a hammer and took away jewelry worth a billion euros. The police were late for a few minutes — the attackers managed to escape in an Audi S6 car, which was later burned in an underground Parking lot and transferred to a Mercedes disguised as a taxi.

The Treasury “Green vaults”, named after the walls previously painted in malachite color, is part of the Association of 12 museums”State art collections of Dresden”. This is a former princely Treasury of the Wettin family, converted into a separate Museum in the XVIII century by the elector of Saxony August the Strong. The “green vaults” are considered the richest collection of jewelry in Europe, many of them are truly priceless — for example, the famous Dresden green diamond (by a lucky chance during the robbery, it was on temporary display at the Metropolitan Museum of art in new York).

During the year-long investigation, the identity of the robbers was established. Despite the power outage, security cameras continued to work and captured the robbers, and despite the fact that the car” Audi ” thieves burned, it was found in their DNA particles. These are three young men aged 21-23 who are linked to the Lebanese mafia operating in Berlin. The same criminal clan is also credited with robbing Berlin’s Bode Museum in 2017, during which a unique 100-kilogram gold coin “Big Golden maple leaf”was stolen. At least one of the suspects arrested yesterday — 23-year-old Wissam Remmo-was already on trial for the Bode Museum robbery. In January this year, he was sentenced to four and a half years in prison for this robbery, but he appealed. Two other detainees are members of the same Remmo family and were already wanted for other robberies and arson.

The location of the stolen jewelry is still unknown. According to the police, the stolen goods can be estimated at a total of €1 billion. According to the Director of the Museum, these items are priceless. The problem is that the robbers did not take the largest and most recognizable items, but smaller jewelry. Investigators fear that they may have been subsequently melted down and the stones sold separately on the black market. In this case, the customers of the theft would still have received €100-200 million in their hands, and the world community would have lost these most valuable pieces of jewelry forever.

Want to increase your chances of selling your painting by 35 %. Post messages using the social media icon - it's easy and fast! Select one or more social networks.