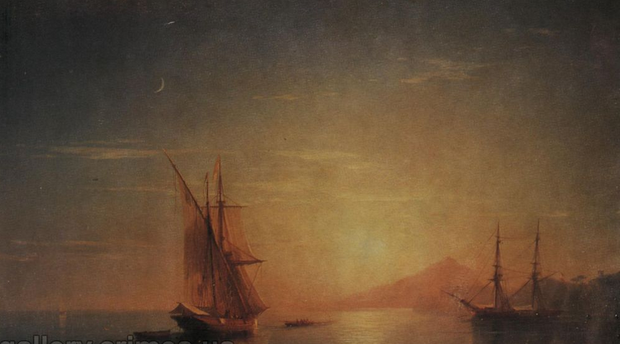 The real name of the most talented Russian marine artist Ivan Aivazovsky is Hovhannes Aivazyan. But the family was forced to change their last name as a result of the tragic events related to the persecution and genocide of Armenians by the Turks. The great artist was born in Feodosia, and today many of Aivazovsky’s famous paintings are on display in the art gallery of this southern city. And in our small review, we will present some of the most famous paintings of the most talented artist.

Anyone who is interested in painting knows that the marine painter Ivan Konstantinovich Aivazovsky comes from a noble Armenian family and the real name of the painter is Hovhannes Ayvazyan. Hovhannes was born on July 17, 1817 in the city of Feodosia, where the future artist’s great love for the sea was born.

Let’s start with the picture, which has grown over many legends, and is undoubtedly a kind of business card of the Russian artist. “The Ninth Wave” is without a doubt the most famous painting by Aivazovsky, which simply cannot but cause admiration. It was in the “Ninth Shaft” that the skill and incredible talent of the artist was revealed. So accurately and realistically conveyed all the tragedy and destruction of the storm on the high seas. But the sun rises from behind the clouds, giving the sailors, caught on a piece of the mast, hope for salvation. Interestingly, Aivazovsky painted the monumental canvas in just 11 days. It is simply amazing what inspiration, the incredible power of creativity possessed the artist at that moment. The legendary work of Ivan Aivazovsky called “the Ninth wave” is fascinating and surprising all at once. The plot of the film tells about how a group of people who survived a shipwreck on a small wreck of a ship, trying to escape from the storm that has played out, but a huge wave mercilessly overtakes its victims and is about to hide in the sea abyss. The seascape is very realistic and admires the play of colors, shadows and light. The bright red sunset and the azure waves seem to be playing hide-and-seek with us, now hiding, now surfacing again from the bottom of the sea.

The artist also turned to the glorious pages of Russian history. The victorious battle of the Russian fleet over the Turks in the Chesma Bay in the summer of 1770 on the canvas of Aivazovsky strikes with realism. The masts of the sinking Turkish ships are burning down, and the ships of the Russian squadron are passing between them in a victorious formation. Despite the bloodshed and brutality of the war, the picture strikes the viewer with incredible calm. It’s all over now, time to cover up the guns and help the wounded comrades. And again, through the dark clouds and ashes, the sun’s disk peeks out, as a symbol of the Russian victory in the naval battle.

Ivan Konstantinovich, who grew up and lived for a long time by the sea, was passionately in love with him, but the turbulent events of the XIX century left their mark on the work of the master. The sea on Aivazovsky’s canvases is often stormy, restless, as in the painting “Rainbow”. The small vessel, unable to withstand the blows of the elements, tipped treacherously and is about to go to the bottom. People in the hope of salvation moved to tiny boats, and continue to resist the terrible storm. But even here, in a seemingly doomed situation, the painter gives hope for the best. A small gull, anxiously beating between the sky and the raging waves, as if showing people the way to salvation. And a rainbow… The biblical symbol of the end of the flood.

Somewhere in the distance, on the very horizon, the silhouette of a ship is barely visible, and the sea is about to rise in raging waves. The second title of this picture is “A storm is playing out on the Black Sea”. Looking at the canvas, it is simply amazing how the painter managed to convey so accurately, with barely noticeable strokes, the play of waves against the background of the raging wind. Perhaps, not a single artist, neither before Aivazovsky, nor after, managed to paint the sea so realistically, as well as to convey its various states.

Even as a child, little Hovhannes got acquainted with the work of the great master of the pen Alexander Pushkin, and carried this love through his entire life, and reflected it in his work. In the 80s, the painter even created a number of paintings dedicated to Pushkin And in collaboration with Ilya Repina, they wrote an indisputable painting masterpiece “Pushkin’s Farewell to the Sea”. It is interesting, but in the picture “Pushkin on the Black Sea” it is difficult to understand who is more thoughtful, a poet or a slightly agitated sea.

A true patriot of his Fatherland also turned to foreign subjects, but the sea is the only love of the artist, and always acts as the main character of the plot. Ivan Konstantinovich traveled to many coastal cities of the world, and each tried to capture on canvas. “Night on Capri” has taken its rightful place in the collection of the Tretyakov Gallery, and more than one generation has grown up on a fascinating, soft and romantic landscape. The moonlight path, against which a ship sails majestically, and small boats scurry, seems to remind sailors of the shore, of their native home, where they are waiting and loved.

Want to increase your chances of selling your painting by 35 %. Post messages using the social media icon - it's easy and fast! Select one or more social networks.
leave your comment